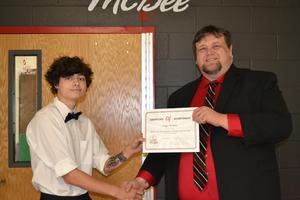 The Most Outstanding Young Musician award is the highest honor bestowed upon young musicians by McBee High School.  Gage received his award at the 13th annual Band Awards Banquet on Saturday, May 8, 2021.

Gage has been active in music since fourth grade by auditioning and being accepted into the McBee Elementary Chorus.  After sixth grade, he joined band at McBee High.  During his band years, Gage has played tuba, guitar, and has most recently served as Drum Major for the music departments most visible ensemble, The Spirit of McBee High Marching Band.  Gage has also received many honors such as being selected to represent McBee in the Limestone University and Winthrop University honor band clinics as well as being awarded a chair through competitive audition in the Eastern District Honor Band.  He is also a past recipient of the Terri Gullick award for band.

When asked about this award, Gage said: “I feel really honored; I’m really thankful to be able to carry on the legacy of those who came before me.  Being in band has been one of the most influential experiences in my life.”

Director Matthew Crawley commented: “students like Gage Nesbitt are a rare combination of musicianship, leadership, and service.  I’m very proud of the young man he has become and can’t wait to see where life takes him.”

After graduation, Gage plans to assist band programs as a staff member while also pursuing a career in the tattoo and body piercing industry.