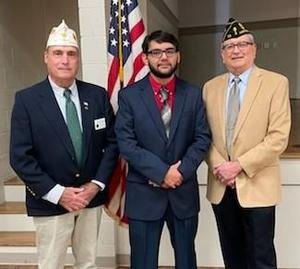 The American Legion High School Oratorical Scholarship Program was created to foster in high school students a deeper knowledge and appreciation of the Constitution of the United States. Other intentions of the contest include the development of leadership skills, the ability to think and speak clearly and logically, and the preparation for acceptance of the duties and responsibilities, the rights, and privileges of American citizenship. This annual Constitutional Speech contest provides college scholarships at the Quadrant, State, and National levels.

In this Oratorical Contest event, Daniel presented an eight to ten minute prepared oration on a U.S. Constitution topic he selected and a three to five minute speech on one of four potential assigned topics from the Constitution. The 25th Amendment was the assigned topic for this Quadrant level contest. The 25th Amendment describes the process should the President be unable to discharge the powers and duties of his office. Daniel spoke in front of an audience of American Legion members, guests, and a contest judge.

Daniel is an active student at McBee High School. He is a member of the Future Farmers of America, the Beta Club service organization, and is a member of the National Technical Honor Society. Daniel also was selected to represent McBee High School at the June 2021 American Legion Boys State encampment. Boys State is a weeklong program which teaches rising high school senior boys about State government processes. Daniel also has a part time job at Big’s restaurant near McBee, SC. Daniel is considering higher education aspirations in an engineering field or law school. Daniel was sponsored for this oratorical contest by the American Legion Post 53 in Hartsville. Daniel will represent McBee High School and the Third Quadrant of the South Carolina American Legion organization at the state level competition in Columbia on Saturday, March 12th.

The American Legion Oratorical Contest is for high school age male and female students in the 9th through 12th grades. Students can compete in every year they are eligible. The local Post contests start in January each year with the Quadrant, State and National contests following. For more information about The American Legion High School Oratorical Scholarship Program, Boys State, and other American Legion programs visit: https://scarolinalegion.org/page/content/programs/.